It Takes a Community

Today is the final day of building! After working on separate teams for the week, all of the members from the Alta West team had the opportunity to all work together alongside with our El Salvadorian brothers and sisters. It perfectly summed up what this entire week has been about so far – building up a community, together.

It was fitting that one of the last homes we built was for Marco and his beautiful family. He had worked hard alongside us for the past few weeks, willing to do whatever job was needed of him. This house comes to him as a tremendous blessing as he told us that in a previous earthquake, a piece of his roof fell on his baby boy, and that he lived in constant worry that the current structure they were living in would not withstand another earthquake. 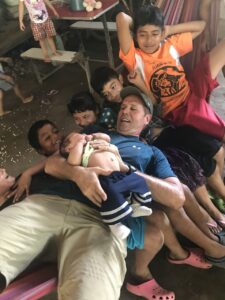 I personally spent a lot of the time with the local kids at these work sites. Although we didn’t speak the same language; playing games, singing and dancing is universal to every kid (and kid at heart). In those moments, I couldn’t help but to imagine a better future for them – that seeing neighbors helping neighbors will plant that seed in their hearts to do the same for their communities when they get older.

Beyond the team of people that actually drilled in the screws, hoisted up the walls, and dug the holes, behind every home there was a community of Canadians and El Salvadorians rallying together. While we are done building these 20 homes we set out to do, the work has just been started to build up these communities.